She is on our team. 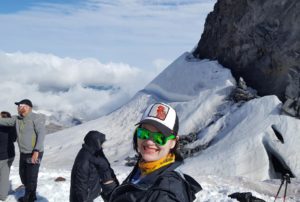 Becky Vinson is known for her deep love of others and an “I-can-do-that” attitude. This last year, she was one of our community climbers with our Climbing Out program. Her wit, sass, and southern charm is top-notch in our book. Becky is one of a kind. Recently we had the opportunity to interview her and hear more about what makes Becky, Becky. She shared her ups and downs, the courage needed along the way and some of her reflections on the climbing program.

We are glad to know her. She is on our team.

Becky lived through more real-life nightmares than most kids ever should. One of her earlier memories was losing her father. He was murdered at a local pool hall after a fight broke out. Her family was devastated and she felt horrified that she never was able to say “goodbye”. Things got worse. Home life was hell. With a very abusive step-father at home, home was not “home” at all. During Becky’s senior year in high school she was kicked out of her house. She was homeless and just looking to catch a break.

Growing up on a hog farm in North Carolina teaches a kid a thing or two about hard work. She possessed some deep seeded grit and toughness, or at least enough to keep moving. Becky knew she had to do something more than stay homeless and one day, she finally caught her break.

There was a posting for a military test in town and if you showed up you would get donuts. She thought, “I don’t think the military is for me, but I’ll go for the donuts and take the test.” She ate donuts, and to her surprise, she aced the test. “Every branch of the military was calling,” said Becky. The first shimmer of light was breaking through. She thought, “this will get me off the streets. They have food. I will get education and money. I have to do this.”

“Every branch of the military was calling.” The first shimmer of light was breaking through. She thought, “this will get me off the streets.”

A few months later she was at boot camp facing another challenge; one that became a defining moment in her story.

“I’ll never forget this as long as I live. During one of our trainings, I really wanted to take a breather; I couldn’t keep going. They don’t let you do that there. The drill sergeant was yelling at me and I told him ‘I can’t do it’! I think he saw I was actually trying and I was serious. The sergeant broke out of character a bit and said, ‘Listen if you put your mind to it, you can do it’. That’s pretty much all I needed. Thank God, he said that! That changed my mind set forever. I already was doing this, but it sunk in deep then. And it’s changed me forever. It’s now the attitude I always hold.”

After the military Becky continued to beat the odds. She aced most of the ACT and decided to become a nurse. “I could then finally legit go to college; I knew I was smart. No one in my family went to college. When I was young I was told I was dumb and I trusted that. It was totally false. To come from being homeless to going to college; this is still my greatest personal achievement to date. I was so happy to be there! I was like ‘EDUCATE ME, I’M ALL IN!'”

“‘Listen if you put your mind to it, you can do it’. That’s pretty much all I needed.”

This narrative of overcoming impossible challenges continued on and on. As a senior in college she adopted a 14-year-old kid from a church she was attending. He went on to play in the NFL. She traveled to other countries to help with their medical practice. She knew that administering medicine was needed in those desperate lands, so she went back to school and became a nurse practitioner. 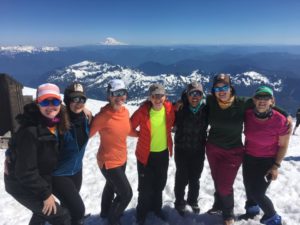 This past year we journeyed with Becky’s and her story as she joined our Climbing Out climbing team.

She wanted to face another challenge; the “impossible” goal of climbing Mt. Rainier. And also to do it with what she calls “MY PEOPLE”. “If they can do it, I can do it, and vice versa. This is just another obstacle and I am not afraid.” Becky’s vibrant personality became a gift for the entire team. And more importantly, Becky, like the rest of the obstacles in her life, continued to show up with the attitude of “If you put your mind to it, you can do it.” On a fitness level, she was a long shot to be ready and able to climb. But by the summer, Becky had “wow-ed” us. She trained and trained and trained. She was ready. And she climbed mountains.

Some significantly challenging moments earlier in life made Becky the woman she is today. Taught her she is stronger than she thinks she is, and wth a team you can go far in life. Becky, you are a dangerously-brave, fun-hearted mountain climber my friend.

“This is one of the most life-changing volunteer experiences I’ve ever had.”

When asked “what would you say to others considering volunteering?” Becky’s replied by saying: “You’d be a fool not to do it. I am a person that does enormous amounts of volunteer work everywhere I’ve been. This is one of the most life-changing volunteer experiences I’ve ever had. Try it out!”

Becky’s story inspires us. She is on our team. 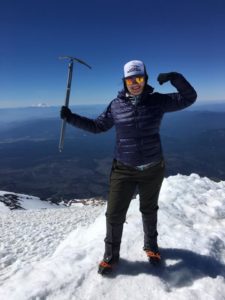