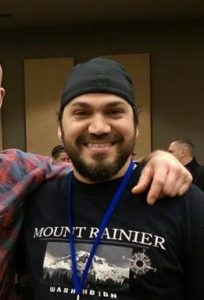 Mike was tired of being lonely and was hungry for more.

Growing up in Puerto Rico and surrounded by a hard family life, at a young age Mike came to believe he was unlovable. Never living with his mom and dad at the same time, the feeling of “home” and “security” was uncommon. The people that were supposed to love him the most, not only neglected him, but eventually left him altogether. After decades of living with low self-esteem, hating himself, and using drugs and alcohol to cope with the pain, Mike desperately wanted a change.

After finishing a free meal at the Seattle’s Union Gospel Mission, Mike noticed the hope of the men’s lives in the addiction recovery program at this mission. That’s all he needed; he was in for a change, hoping for one that would last a lifetime. That hope would turn into more life and love than he expected to ever find. Shortly after joining the program, Mike joined the climbing team. More like a family, this team supported him in recovery and changed his paradigm on relationships altogether.

“It was a family away from family. When I knew no one in Seattle, all of a sudden I was with a bunch of people that were giving me more love than I’ve been given in long time.”

“Truly what helped the most was being around others constantly, especially through physical training and hiking created new friendships. I began to trust the climb team. Overtime, the constant encouragement and camaraderie of the climbing team began changing me. I began believing and knowing that the men and women I was around had my back no matter what. This changed me forever. “

“These accomplishments will never be forgotten. I talk to a lot of guys I climbed with in 2015 still and we all have been significantly impacted by this climbing program. This becomes like a family or really church. We check-in, encourage, and support one another through life’s ups-and-downs”

Mike now works at Amazon and Seattle’s Union Gospel Mission, and is on his 3rd year of sobriety.