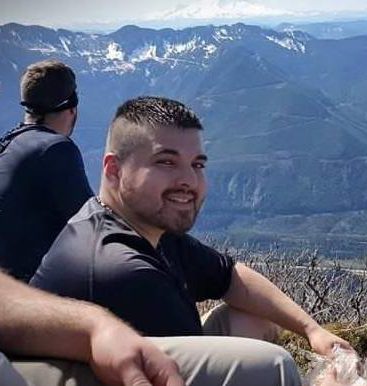 Growing up in the northwest, Sam never knew stable and healthy relationships.  Between his family never settling in one place, his mom struggling with a drug addiction and eventually leaving her family for a gang member; the pain of broken relationships only grew. Sam had to grow up quicker than most. Learning how to fend for himself, he quickly got mixed up with the wrong crowd. An addiction to meth and selling drugs became his life after serious heartbreak and failed work opportunities. Sam eventually found himself homeless and desperate. Looking for help, Sam checked himself into the addiction recovery program at Seattle’s Union Gospel Mission. He knew anything positive would be better than the life he was currently living.

Sam found hope and life there. And over that year, Sam decided to continue to challenge himself and join the climbing team.  This team challenged him not only to grow in healthy relationships, but also grow in his relationship with himself. Sam was overweight, out of shape and he knew it. Being out of shape, put him “behind” the rest. He knew the challenge ahead was significant. To succeed he knew he needed to not quit on himself, and when he wanted to quit, Sam learned that his team would not quit on him either.

More and more self-confidence grew workout after workout for Sam. He learned he could do more than he ever imagined with the encouragement of a team and learned what teamwork was really all about for the first time. Unknown to him, the largest challenge he faced was still ahead. After months of training and getting into shape, Sam unfortunately failed to summit Mt. Hood (A mountain, climbers must summit to continue on to Mt. Rainier ). His climbing with the team had ended.

Sam was frustrated with himself and felt like a failure. Sam was faced with a difficult question, “How am I going to respond to this difficulty?” With the support of his leaders, and the encouragement of the team, Sam decided to continue to show up. He continued to train, continued to support those climbing, and took on a new role; ‘team encourager’. Before the team left for Mt. Rainier, Sam helped load the van, prepare meals and load packs. He also did something no one expected, he wrote a letter of encouragement to each of his teammates for each of them to read up on the mountain. This response was transformative. This was a summit Sam climbed for all; one that will always be regarded as a “higher summit” than any mountain top.

“The reward was not the mountain, it was the relationships and lessons we learned along the way. They say it’s not about the destination, but the journey, and this has never been truer.”

“I felt healthy as a person. I had never felt like that before. The guys would say ‘we need you here’ or ‘we need you still, to encourage us, please don’t leave’. They didn’t look at me like I was not on the team. They wanted me there. This brotherhood and this team changed me”.

“These people chose to be a part of this program. These guys were bold and strong. They were like family. We were a core group that really came to love each other. We all really wanted to be good, to do good, to live good lives, and to show others how to do the same. It’s been two years and we still check up on each other. This family and this good still continues today.”

Sam remains healthy and connected to his team of support, and recently received a great job as a correctional officer at a state prison.