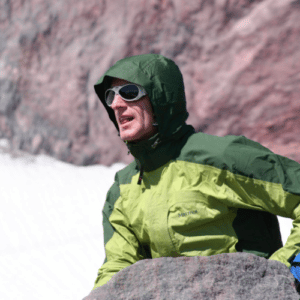 Scott was ready to end it all by throwing himself off of Seattle’s Magnolia Bridge. But something stopped him. When he made his way to Seattle’s Union Gospel Mission, he was desperate for any kind of change.

Abandoned with his grandparents at age four, Scott grew up a natural athlete. He sought the adrenaline and escape brought by extreme outdoor sports – and drugs and alcohol.  By his 40s, his life had spiraled out of control into homelessness.

His time at the Mission and on the mountain put a firm foundation under his feet – finalizing his commitment to sobriety and the depth of his healing. Scott now interns full time in Seattle and helps lead Team Mission, a program connecting community runners with individuals in recovery regaining their fitness.

“Being on the very first team gave me an opportunity to maybe have a dream become a reality – to climb Rainier.

“It brought together a team of men striving for a new life. It taught me that without others, life isn’t accomplished. Having been on Hepatitis C treatment during training and the attempt, I learned to work through struggles. Then the real struggle began during the climb.

“My treatments made me sick and on the way to Camp Muir I became sick. It was decided that I should not continue on. This is where the struggle really began. I felt like a failure again. That was a fear.

“It wasn’t until 2 days after the return from the summit did I really overcome a struggle in life. I understood that I was loved and worthy – that it’s not about doing what we want to do – but listening and accepting where He has us in life is ok. I’m accepted for who I am today.

“I’ve since been to the summit of Rainier and many other Pacific Northwest glaciers. These summits still teach me more about life, but that first attempt taught me that if we don’t succeed, to put that to good use when attempting another summit in life. “