Mountains help us out…
Program Spotlights

Mountains help us out… 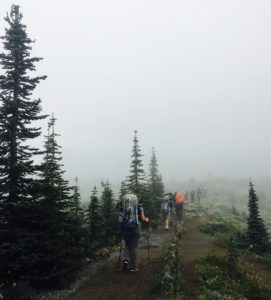 This year was different than most climbing years. It presented new challenges and more “failure” than I expected or knew how to handle.

How will I respond to failure? How will I choose to tell the story?

There’s this mantra out there, maybe it’s on a bumper sticker somewhere or maybe it’s called the American Dream, that if you work hard enough you will get what you want. When I was a kid I remember my parents telling me I can become whatever I want to be, as long as I put my mind to it. I think I asked my mom if I could work at Disneyland when I grow up. I’ve obviously missed my calling. But that’s how life works right? You can get what you want by the power of your will.

Mountains help us out.

I appreciate that about mountains. They are realistic. They don’t apologize. They don’t care about my feelings. They are indifferent to my life goals or my 7-step plan. Sometimes a mountain lets you climb, and other times it doesn’t. Somehow being at the mercy of a mountain sets my perspective just right. 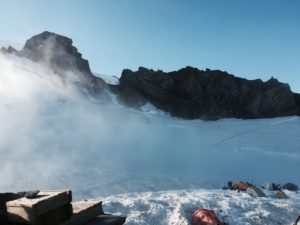 If you take a look back at an earlier blog post from this year, you’ll read a story about a serious mountain “gut-check”. Back in May we went after Mount Hood and we pretty much failed. It was tough. The mountain was not kind. We weren’t prepared and we got whipped, with about half of the team turning around early. Our team felt scattered and could have fallen apart. It was hard. But it became both a teacher and a motivator.

We trained harder, we got faster, stronger, and more connected as a team. “This time we will be ready!” Some climbed extra mountains to prepare. Diets became more strict. Technical training increased. Mount Rainier was in our sites and we were going to get it this time. This time will be different.

Mountains help us out.

Mount Rainier said no. Mic drop. At 13,500 ft, a snow-plug the size of a football field fell through making the route impassable. The mountain decided it wasn’t going to let us climb. No one climbed to the summit for three or four days, us included.

We say this phrase a lot, I’m sure you’ve heard something similar a time or two…“life is about the journey and not the summit”. WHAT. Get out of here. I want the summit! I’ll be honest with you, I want to get to the summit and then get the heck off the mountain. Another notch on my belt. (Maybe I should work at Disneyland; where dreams do come true.) 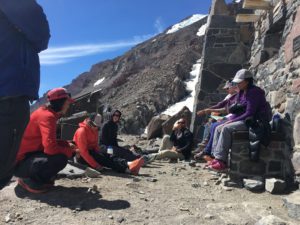 Team Debrief of the Rainier Climb

This year the metaphorical mountains we had to cross and trek over as a team were more technical and demanding than years in the past. This required more out of us every step of the way. More teamwork, more communication, more strategy, more change of plans, more love, more humility, more of us in every way. In the moment it sucked, but looking back, I wouldn’t want it any other way. This journey made us a team, and made each of us better women and men because of it. This team became accustomed to the value and worth of the team itself. In the end that’s what life’s all about anyway, who you take along on these messy, beautiful, life-adventures.  This is the kind of life I want to live; living in the tension of the journey, with the risk of failure or success up in the air, doing it alongside those I love. These are the kind of stories I want to tell. The epic tales of a team. 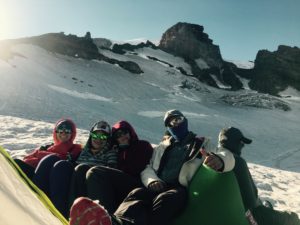 Lounging on the newest mountain accessory. The inflatable couch.

I think it was best said by Matthew and Uncle Mark the evening before we set foot up the mountain back in August. Below, read what Matthew had learned. He nailed it; Relationship, failures included.

Sometimes we need failure like we need air. Sometimes a change of perspective isn’t what we planned on, but exactly what we need; reminding us about how to be human again and drawing us back together.

Mountains, help us out.

“I went from having no relationships, to having so many people surrounding me that love me. It’s really been those relationships that have gotten me to this point. If it wasn’t for my team and leaders, I would have never grown physically or spiritually as I have.

Im at the point now where I know that it’s not just about summiting; whether I made it or not. This (points at people around the table) is the victory that I have been seeking and searching for. Obviously that (the summit) is something I have been working for and is something I want, but it’s been the relationships that are the most important thing in life I’ve realized. You all are going to be here after Mount Rainier is over. So thank you.”

“THIS IS THE PROGRAM. What we have here as a team, who you are now sitting at this table, that’s who you are, that’s what you’ve gotten from this program”