The Climb Out of Homelessness
In The News

The Climb Out of Homelessness

In In The News on September 1, 2015
Recovery Beyond > In The News > The Climb Out of Homelessness 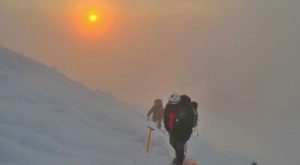 We could barely see each other from 30 feet away, but the entire group of fifteen couldn’t have been more thankful.  We were finally sheltered, however partially, from the cutting wind and the cloud moisture that would freeze to our eyelashes or exposed hair or just about anything fibrous.  It was 7:22 am and we were standing in the summit crater of Mt. Rainier.

Eighteen members of our team left the comparative comfort of Camp Muir at one o’clock that morning.  We had already stuck it out through some severe lighting storms that had almost completely shut down climbing operations.  Only a handful of climbers went up the mountain the night before, and they left late– much later than normal.

Two of our climbers opted to stay behind at Muir, tucked onto the backside of a ridge at 10,080 feet.  One worried about the danger, the other was ill. Our team brought along a spare volunteer guide, and he brought along a spare rope, in case we needed to “spin” climbers along the way. At 11,100 feet that guide, Bo Valencia would pull out that spare rope, tie together two more retreating team members, and lead them back to Muir.

It was not a classic climb, and these were not classic climbers.  Most were members of the residential addiction recovery programs of Seattle’s Union Gospel Mission (UGM).  That’s right: recovering homeless addicts, who were completely apart at the seams this time last year.  Now, they were climbing one of the highest mountains in the lower 48, and under pretty challenging conditions.

Just like with mountains, climbing out of homelessness and addiction requires a team.

They would have to cross a deep crevasse over a ladder-bridge, fight serious winds and cold, low visibility, thin air and exposure to fall hazzards and falling rocks. But that’s the easy stuff compared to overcoming heroin, crack, alcohol and meth addiction severe enough to have taken everything from them.  Families, jobs, children, and homes can be all consumed into the yawning ravenous mouth of brokenness.

Just like with mountains, climbing out of homelessness and addiction requires a team.  You need guides, and tools you don’t have– tools you don’t yet know how to use.  Sometimes people slip and trip.  Sometimes they get exhausted and quit, descending to the lowlands.  Most of the time it’s hard to see the goal of the summit, and you have to trust the guides that if you keep climbing it will come. They know; they’ve been there.

At Seattle’s UGM, we had multiple goals behind the crazy idea to help our recovery clients become climbers.  First, we wanted the men and women themselves to know that they are not defunct or defective.  Challenged: yes.  Defeated: no.  Second, we wanted to find a way for the community to enroll in their journey of healing and recovery.

Most people see homeless persons and don’t know what to think.  Why don’t they get help or get a job?  Are there no jobs?  Are they just junkies and alcoholics?  If I give that panhandler money (I never do, by the way), will it just go to drugs or beer, and is that something I should worry about?  Most people have no idea that their most important gift would actually be themselves.

When I told my team at UGM what I wanted to do, a colleague told me about Mark Ursino.  Mark is a climber, and never dreamed that his personal hobby could help change someone’s life.  So thought the other volunteer guides, like pro guide Eben Reckord of International Mountain Guides, Inc. or the myriad other supporters.  Our climbs enable up to three-dozen people or more to come around these “recovery climbers” and, along the way, hear their stories.  At some point, the addicts and the volunteers realize they have actually become part of each other’s stories.

Everyone who climbs knows that it’s not really about the mountain.
It’s about being on the mountain with people you trust.

Addiction and homelessness trap people into a self-defeating perception of one’s self, and a self-reinforcing social circle of dysfunction.  Becoming real friends with “normal” people while doing amazing things with them– sober– serves to break down so many of the walls that have kept these gifted neighbors in their prisons.

Everyone who climbs knows that it’s not really about the mountain.  It’s about being on the mountain with people you trust.  Helping the abused, abandoned, traumatized and betrayed learn how to trust again requires a partner.  It requires a rope.  It requires a mountain to climb together, entrusted to one another in the face of some danger.  So, what I love the most is seeing people from the community and people from the streets becoming one team that changes everyone on it.  The summit, if we make it, is icing on that cake.

You can help.  Contact your local rescue mission.  Ask to speak to a program supervisor, and invite some recovering homeless people along with you in what you would already be doing.  It doesn’t really matter if your hobby is climbing or cycling, canoeing or sailing, flying model aircraft or the full-size kind.  Just share it.  Teach it to someone who didn’t have that chance, who wasn’t invested in.  That investment will change you both.

My climbers are now graduated from UGM’s recovery program, working jobs and internships.  Some of them have reconnected with families. Others are still navigating that.  Each has a new mountain to climb, the next challenge.  We continue to talk, because they’re my friends.  Some have slipped and tripped– I’d be lying if I said this all worked like magic.

But even for those who have fallen, they’re learning how to stop the fall, get back up and start climbing again.  And I got to be a part of that.

– A note from Publisher Brad Bloom

Seattle’s Union Gospel Mission is a member of the 100-year old Association of  Gospel Rescue Mission (AGRM). The association represents 300 members in North America. There is likely one or more missions near you. Gospel rescue missions have a long history of providing lifelines for those drowning in the waves of adversity and the undertow of addiction. Gospel is part of their name because their leaders are compelled foremost by Jesus’ instructions to actively care for those in need, and to introduce them to the liberating good news of His kingdom and all it represents. Their name includes rescue because delivering those in need from danger is the critical and consuming first part of a sometimes slow but always exciting journey that leads to new desires, choices, and direction in life. The word missions is in their name because those in need see each of their structures as a bastion of protection and a refuge from fatigue and failure, similar in concept to those Southwestern sanctuaries built by pioneering padres long ago.

The exciting story of Mike Johnson and team with men resident at Seattle’s Union Gospel Mission has been documented in the compelling film New Heights, which was nominated for the 2015 Sundance Film Festival. Johnson shares the adventure with you here in Shout! Outdoor Lifestyle Magazine. But, this story offers much more than adventure. It is in invitation to add an extra challenge to your outdoor passions and experience life with those who are homeless. Certainly there are opportunities to climb Rainier with Mike Johnson and men. There are also opportunities to bike with the Denver Rescue Mission or run a race with Wheeler Mission Ministries’ in Indianapolis or perhaps whatever you like to do outdoors to support the ministry of one of 300 rescue gospel missions throughout North America. Find one near you, pray, contact them and then Be Life to others by taking your outdoor to new heights.