There’s A Reason It’s Called “Climbing” And Not “Summiting”

For the first time in the 7 years we’ve run the Climbing Out Of Homelessness Program, Mt. Rainier got stingy and denied us (and everyone else climbing that night) the summit.

We met in Ashford on Saturday, August 12th for final gear check, and to get whatever gear the team lacked, courtesy of Rainier Mountaineering, who has opened their rental counter to us at no charge since the beginning. 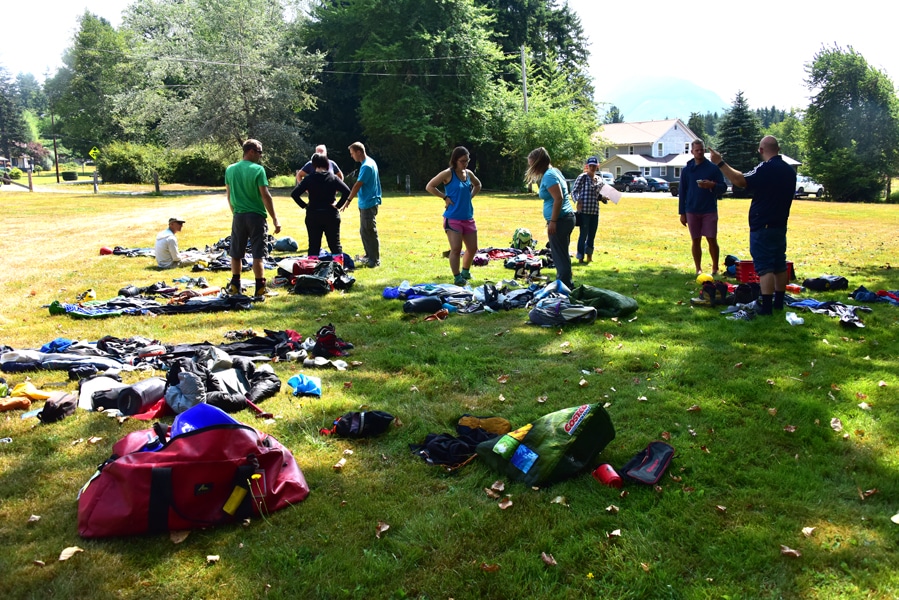 At our annual pre-climb dinner at the Wild Berry Restaurant in Ashford, we caught wind of a huge collapse on the upper mountain on Rainier. We didn’t know what to make of it, but it didn’t sound good. The more we heard, the worse it sounded. It didn’t dampen our festival mood at the dinner, though, and we had our usual presentation of engraved ice axes to our Program Climbers.

We also had our annual “Sundae” and “Cherry” conversation. That is to say, the climbers have already had the sundae – the program and sense of team and accomplishment getting through the training, climbing Mt. Hood, spending the night on Mt. Rainier during our final climb simulation – this is your 3 scoops of ice cream. The summit is the much desired cherry on top, but whether they get that final reward or not, they’ve gotten the sundae. 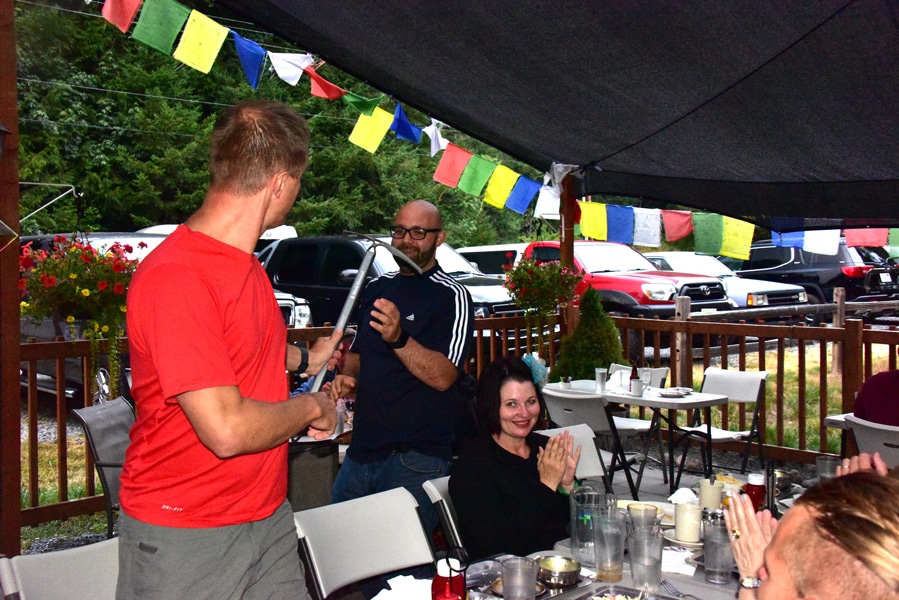 Mike presents an axe to Matthew at the pre-climb dinner.

We woke on Sunday to a persistent mist and a very soggy mountain.

Camp Muir was just at the top of the clouds, though, so we were dry, and pretty much in the clear as we set up camp.

I met with Jason, one of our volunteer guides, and the person responsible for coordinating the efforts of the 3 guide services who are licensed to guide the Disappointment Cleaver route on Mt. Rainier, as well as commissioned with maintenance of the route. He told me that they had no idea if or when they might find a route past the trouble to the summit. He also let me know that he and Phil (another of our volunteer guides) would most likely be tied up working on the route, and wouldn’t be able to help us with the climb. I told him that I’d already figured that would be the case, and was working out contingency plans – none of which could result in all of us making a summit attempt.

We had dinner, and went to bed, knowing only that in the morning, the team would be going through another round of “Basic Snow School”, this time with Leon (our climb leader for the past several years) and Lindsay (who has been a key volunteer guide since 2013 as well).

Since it didn’t look like there was going to be a route to the summit, Leon and Lindsay came up with a plan to take the team to Ingraham Flats (the first stop up from Camp Muir) the next morning as a way to allow them to experience and see more of the mountain, and perhaps lowering them into a crevasse just for giggles. It’s actually a pretty cool experience.

The team was disappointed at not getting a shot at the summit, some VERY disappointed, even though they had been prepared for the possibility. But the mountain rules. 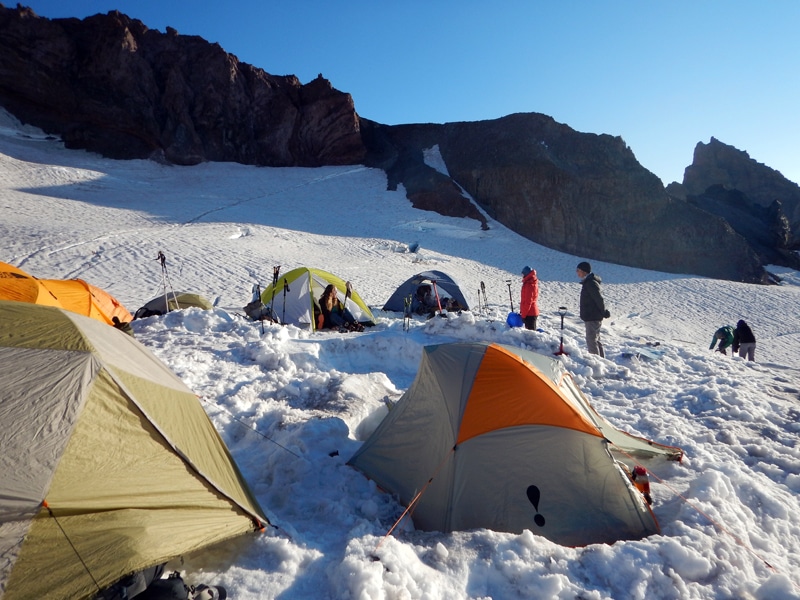 Our Camp At Muir

Just before the team went to bed, we received word that two professional guides had made it to the summit. That didn’t mean that there was a route that your average climber (much less a pack of newbies) could climb successfully, but it did mean there was some kind of a shot – maybe. So the team went to bed knowing there was a SMALL chance they might get awakened at 11 pm to climb, but most likely they’d get woken up later in the morning to climb to the Flats.

After the team went to bed, more guides headed up the mountain to try to at least heavily mark the route. Leon told us to keep our radios on, and he and Lindsay would make the call on the climb “later.”

Just before 11 pm, we got the call from Leon that he didn’t have any news from higher on the mountain, but he thought the Program Team should give it a shot. We rousted the climbers, had breakfast, got everyone geared up, and sent them out. 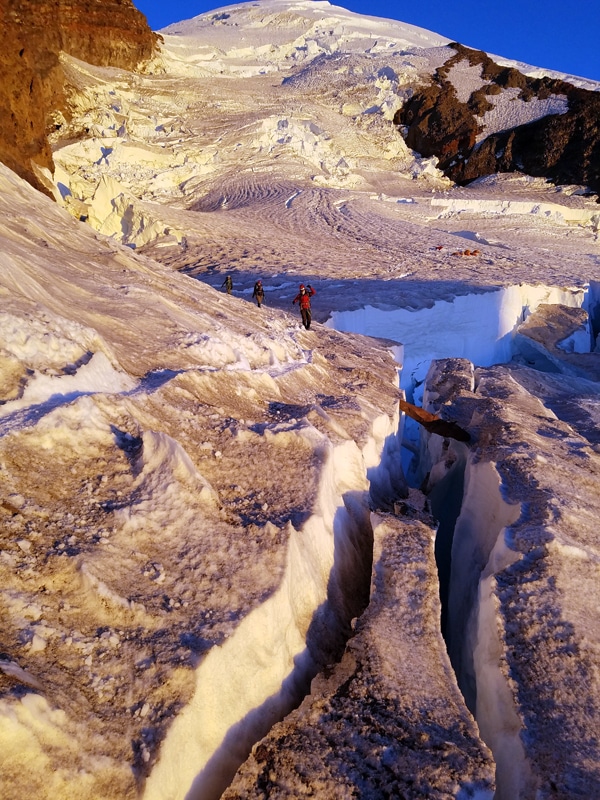 The climb team on Ingraham Glacier.

Even before the snow plug collapse, the route had been unusually long, hitting the summit in a spot no one (even long-time mountain guides) ever remembered it going. After the collapse, it was not only long, but hit a spot of mountain that was deeply sun-cupped into formations that are called “penitents” because the formations kind of look like people on their knees in prayer – thousands and thousands of people. They are very difficult to traverse, because there is no flat footing (at any angle), and you climb over and through the sun cups. There is no efficient way to climb, and the going is VERY slow.

The RMI guided group ahead of our group turned around just above 13,000’. Our team followed suit. The final push to the summit was going to take more than 2 hours, and being already over 5 hours into the climb, there was concern about people having the ‘gas’ to get down safely. Remember, the goal isn’t to get to the top, it’s to get back to the bottom – via the top if possible, but the top is optional, the bottom is not.

Everyone came off of the climb MUCH happier that they at least had taken a shot at the summit, and having gone through what they’d gone through, and seeing what they saw, knew that they had given it their best shot, and the mountain just wasn’t giving it up. No one summited that night, and I don’t believe anyone summited the next night either.

“Many of us throughout life need lessons in how to deal with disappointment constructively. And I think this team did.”

Not reaching the summit was disappointing for all of us, but the climb was a success. In some ways, maybe even a bigger success for NOT having summited. Many of us throughout life need lessons in how to deal with disappointment constructively. And I think this team did.