Anyone who grows up in the Seattle area is used to seeing the large visage of Mt. Rainier on the skyline (when weather permits, that is). Most of us glance at it with some sort of awe – but some of us have stronger feelings. “I see the mountain all the time and joke that I’m mad at it,” says Abi Brewer. Abi has made two attempts to climb the 14,000-foot peak; both were turned around due to unsafe conditions. But this spring she’s preparing for her third attempt, this time as a fundraiser for Recovery Beyond, the program that changed her life and started her mountaineering journey.

As recently as two and a half years ago, if you’d asked Abi about her mountain aspirations and accomplishments, the list would have been short. Although she grew up in the Seattle area, she had never been much of a hiker. A long-standing battle with alcoholism resulted in her losing her family and brought her to New Life in Tacoma, where she stumbled onto the Recovery Beyond climb team. It wasn’t exactly love at first sight. “I hated it at first,” she said, “Everything was just so hard. I didn’t even like the hikes.” In the long run, however, some of the most miserable parts of her journey ended up being turning points. That year, their summit attempt of Mt. Hood was one of the most excruciating, throwing inclement weather and severe cold at a group of newbie hikers. “I have honestly never been so miserable in my life,” she says, “But I survived. That was what was empowering. I felt like such a badass just for having survived that discomfort.” That year she also bagged her first “big” peak, Mt. Baker, in similarly lackluster conditions: it was rainy, cold, and white-out conditions occluded all view. “I just cried. Like, how did I get here? It was not how I imagined my life would look.” 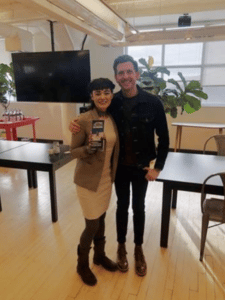 Abi with her brother at a recent event.

Now two years and three months sober and a New Life graduate, Abi continues to use the lessons she learned in the program in her day-to-day life. Exercise has become a mainstay of her anxiety-management protocol, as has the community she found at New Life. “Honestly, having that community is like, you need it in recovery. I wouldn’t have learned the importance of it without the New Life program and the Climb Team.” She and her husband are also in the midst of opening a tattoo parlor called “Northern Sanctuary Tattoo,” a risk she doesn’t feel she would have taken without having been through the program. “We see this company as a way to minister to people who might not have as much exposure to Christianity,” she says.

Abi also maintains her commitment to helping others achieve this same kind of transformation. “You get into rehab and you feel like you have nothing going for you. I just want to support people so they can get out and tell their story.”  Besides volunteering at New Life both in the climb team and by leading Bible studies, she has also chosen to join the fundraising climb of Mount Rainier. A team of 8 climbers, guided by IMG, is making a summit attempt on Mt. Rainier May 16-19 this year in honor of the Recovery Beyond program. Each climber’s donations will support two individuals in the Climbing Out program. For Abi, this cause is deeply personal. “Without the climb program, I wouldn’t feel as complete. It really made my quality of life as a sober person – I’m happy.”

So what better way to exact “revenge” on the mountain that has eluded her than to climb it in honor of a program that has meant so much to her? “I’m just hoping the third time’s a charm,” she jokes.

Want to help Abi meet her goal? Check out her fundraising page below or join her on Sunday, February 24 at Northern Sanctuary Tatoo (her new studio) for a fundraising night featuring a screening of the film “A New High” as well as art by local artists and tattoos by donation. If you’d like to snag one of the last spots on the climb, details can be found on the Fundraising Climb page.